Quick Reviews
Without any fear of contradiction whatsoever, I can assure you that you've never read a book remotely like When A Fan... I couldn't put it down.
James Shannon, The Beat

I laughed until I cried. I thought I hurt something. The cons and scams of Amy Player are the most fun you will ever have reading about a sociopath and the horror she inflicts on everyone in her orbit.
Colleen Doran, Graphic Artist

You could say the saga is merely a tale of small time fraud. To do so, however, would leave out the cross-dressing, faked suicides, identity theft, and speaking in Hobbit.
Zach Dundas, Willamette Week


Any fan of the films will want this book, as will anyone interested in the ways people fool each other.
Dan Hays, Statesman Journal


Couldn't put it down. It's very funny and incrediby sad.
John Howe, Artist/Illustrator


It's a good thing it's funny, because otherwise it would be truly horrifying.
Krista Kapphahn, Announcer, Northwest Public Radio


Let this be a lesson to all obsessive fans: this is NOT the proper way to stalk a celebrity!
inDUHvidual, FigwitLives.net


It's so good to know there's someone following up to ensure these two women don't get away with it.
Matt McLeod, manager of the New Zealand band The Black Seeds


Amazing, pathologically intense degree of self-delusion wrapped in flim-flammery wrapped in self-delusion again--with the money aspectbeing just icing on the cake.
David Salo, linguistic consultant for the "Lord of the Rings" film trilogy.


Let a couple of sociopaths loose in a charitable venture and the surprises never end. It reads like a thriller.
Tehanu, co-founder, TheOneRing.net

The Fraud Goes Ever On and On

Amy Player came from a good family in Virginia. She attended Christopher Newport University for two years and worked at Busch Gardens in the summers. Pretty, bright, and a talented artist, it's hard to understand how she ended up creating a phony charity and fleecing half the cast of the "Lord of the Rings" film trilogy.

In 2002 Ms. Player created an online fan club in homage to actor Sean Astin and his character, Sam Gamgee. This club caught the eye of Abigail Stone, a fan from Oregon, and the women discovered two mutual interests: an obsession with Astin and the other cast, and the willingness to do or say whatever it took to meet them.

Abbey and Amy developed their fan club into a beautiful, professional-appearing website. They referred to themselves as "Bit of Earth," and claimed that they wanted to raise money "for charity." On September 11, 2002, Amy went to Washington, DC and approached Sean Astin after his speech at the Capitol (Mr. Astin sits on the President's Council for Service and Civic Participation). Amy asked him to help out her "fledgeling charity" by volunteering with other members to build a Children's Reading Garden for a public library.

Their planning was perfect. They knew that Astin, having just given a public appeal for active community service, could hardly turn Amy down. They picked those themes because Astin is quite vocal about his support for literacy, and gardening would naturally lend itself for publicity for Astin's movie role as gardener Sam Gamgee. Lucky for them, Astin loved the idea of focusing the enthusiasm of LOTR fans toward a charitable community project, instead of the usual autographs and merchandise. He agreed to help build the garden!

With that kind of endorsement, membership in Bit of Earth rapidly expanded to hundreds of Astin's fans worldwide. All were told that BoE was working in direct association with "Reading is Fundamental" to raise funds and build gardens to promote literacy.

The garden was built in Beaverton, Oregon, in 2003, and Astin's presence gave them renewed international publicity among his fans. Other major LOTR websites covered the news and it seemed that the sky was the limit for Bit of Earth, with its small army of enthusiastic fans working side-by-side with celebrities to improve communities.

Then it all hit the fan. Amy got caught in a complicated lie, in which she tried to mooch free airline tickets for actors to fly from New Zealand for a Bit of Earth event. This resulted in a miserable trip for several actors. Two of them ended up sleeping on the floor of Amy and Abbey's filthy apartment, instead of the deluxe accomodations they had been promised for attending this "fundraiser."

After the discovery of one lie, hundreds more fell apart. Former Bit of Earth volunteers came forward with horror stories. Amy borrowed a friend's computer and didn't "log out," which gave open access to the official Bit of Earth email account, and revealed hundreds of lies attempting to manipulate celebrities, businesses, volunteers, etc. into supporting this fake charity.

This book was written by one of their victims. It takes the reader through the incredible web of firsthand evidence, revealing just how the half-truths, exaggerations, blame games, and other manipulations were employed to swindle both fans and celebrities the world over. Even without the "high drama" of murder or huge sums of money, this book will fascinate you with the real-life details of con artists in action.

How did you get mixed up with a fake charity?

When did you first realize that something was wrong here?

Did Jordan really fool people into thinking she was a man?

Is it possible that Abbey and Jordan really meant well but just got in over their heads?

How did they flimflam celebrities into their scheme?

Why aren't these women in jail?

Where are they now?

Have they tried any more scams?

What made you decide to write this book?

Do you feel foolish about falling for the scam?

What have the celebrities had to say about all this?

What are you doing with the money the book brings in? 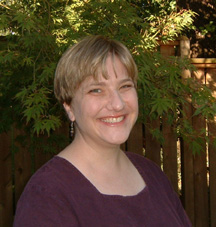 DRIVING DIRECTIONS: Start in Michigan and progress to Florida by way of South Carolina. Get degree in chemistry at Harvey Mudd College; stop abruptly to work as a cancer researcher.
Upon achieving extreme boredom, return to school. Get MA in psychology.
After hearing touching story by doctor about a patient with a pineapple, make sharp right turn to Baylor College of Medicine. Irritate living hell out of classmates by commencing piano lessons and watching lots of Star Trek.
Marry college sweetheart.
Proceed rapidly downhill with med/surg internship in Portland, Oregon; determine exact limits of endurance and sanity. Irritate living hell out of other interns by getting pregnant.
Regain some altitude in Iowa during residency in neurology and revel in the elegance of the human brain.
Have baby. Fall utterly in love with baby. Lose all tolerance for destructive, asinine hazing rituals of medical education, particularly 30-hour shifts away from baby.
Take immediate 180 degree turn: quit job. Abandon Conventional Wisdom and the Consumerist Dream. Start down new path of simple living and cherishing loved ones. Discover side roads that had been ignored all along, such as writing, painting, gardening, pottery.
Have another baby. Settle into contented routine until finding out about interesting LOTR-related charity called Bit of Earth . . .

Jeanine works with kindergarten and first grade students at the neighborhood school to build vases for their annual Fundraising Auction. The children learn to make spiral coils and figures, which Jeanine then assembles into works of fine art. Last year, two vases (including the one at left) sold for $155.

Every year, Jeanine participates in the Empty Bowls pottery drive, a collaboration between the Salem Art Association and the Marion-Polk Food Share. Using donated clay, a number of local artists convene for a "Throw-A-Thon" in the SAA ceramic studio, creating as many bowls as possible within a a 12-hour time period. The bowls are sold at the Bush Barn Art Gallery, which typically raises $10,000 each year .