From The Unfinished Tales
of J.R.R. Tolkien

The palantiri were never matters of common use or knowledge, even in Numenor. If Beren the Steward considered the Stone at all when he gave the keys [of Orthanc] to Saruman, he probably thought that it could be in no safer hands than those of the head of the Council opposed to Sauron.

There was ignorance of what had happened to the Ithil-stone: it was reasonably assumed that it was destroyed by the defenders before Minas Ithil was captured and sacked; but it was clearly possible that it had been seized and had come into the possession of Sauron.

(from The Return of the King) Casting the piecs into the blaze, Denethor laid himself on the table, clasping the palantir with both hands upon his breast. And it was said that ever after, if any man looked in that Stone, unless he had a great strength of will to turn it to other purposes, he saw only two aged hands withering in flame.

The third Palantir of the north was in the tower Elostirion on Emyn Beraid. It was not like the others; it looked only to the Sea. Elendil set it there; he would at whiles see far away even the Tower of Avallone upon Eressea in the vanished West, but the bent seas below covered Numenor for ever.

With the shipwreck of Arvedui were lost the Stones of Annuminas and Amon Sul (Weathertop).
Coming Soon: The Stone of Osgiliath had been lost in the waters of Anduin in 1437, during the civil war of the Kin-strife.

These stoneware spheres are inspired by Tolkien's Palantiri and are suitable for use indoors or out. They can serve as paperweight or a "gazing ball" in a garden, or even a float in a pond. Each is handmade on the pottery wheel and signed on the bottom; no two are alike. They come in three sizes: Small (2-3 inches in diameter), Medium (4-5 in. diameter) and Large (6-8 in. diameter). All sizes approximate. 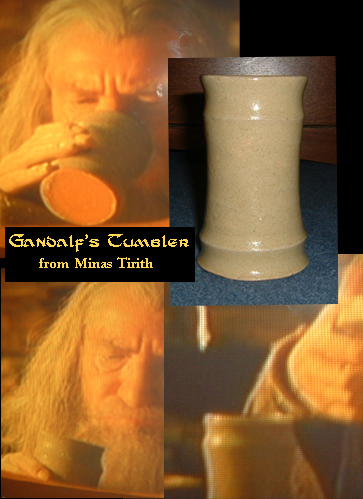 Most LOTR fans have heard about the artistry and authenticity of the props used in the films. The pottery is no exception to that standard of excellence. This tumbler appears on the screen for only a few secons in FOTR, and yet it has a story of its own to tell.

The graceful, fluted design is only the beginning. Look at the upper left photo, at the bottom of the tumbler. The center is orange, the color of the clay itself. This cup was not glazed on the bottom, nor was the bottom "trimmed" to make a foot around the base of the cup. Instead, it was left to dry on the pottery wheel until it popped off from the shrinkage of the clay.

This was a labor-saving step on the part of the potter. By letting the vessel "pop off the bat" the ceramic maker in Middle Earth was able to make a functional, flat-bottomed vessel, while skipping the "trimming" step. Minas Tirith was a big city, and built of stone throughout-- there was plenty of opportunity for dishes and cups to get broken! It makes sense that the local potters would employ time- and labor-saving steps into their pottery manufacture, to keep up with the demands of a large customer base.

In contrast, the mugs and tankards seen in Hobbiton and Rohan are typically more detailed, with "trimmed" bases, fancy handles, or elaborate glazes. These potters have a smaller group to supply, so they have time to add these extra touches.

by Kat
Kat's pottery features inscriptions in Quenyan, Westron, Cirth, and sometimes even English. Kat uses around 30 different phrases, and makes custom pieces too--for example, your name written in Tengwar characters, in the color of your choice. 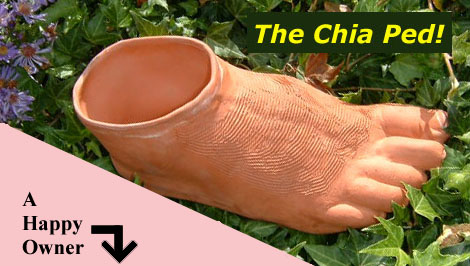 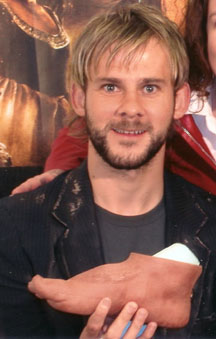 For furry-footed folks with a sense of humor!

It really does that "ch-ch-ch-CHIA" Thing!

SOLD OUT!
The End of the First Chia Age

I have two Chia Peds left. They're from early on in the footmaking process, when I was still experimenting with techniques. As you can see, these look different from the usual feet. I carved the grooves on by hand (rather than with a "comb"); one also has clear glaze on the outside of the foot.

These are the last of the Chia Feet--there will be no more! If you want one, Carpe Chia!
Cost: $25, which includes: 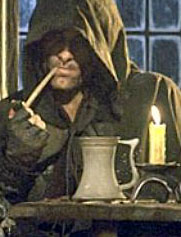 When I saw this beautiful prop in FOTR, I just had to try my hand at it. The tumbler took a while to get just right, but I've finally got it. The most spectacular part of this vessel is the handle, which arches nicely to fit the whole hand.
Porcelain or stoneware. Food, microwave and dishwasher-safe. Ranger not included.

And Now For Something Completely Different... 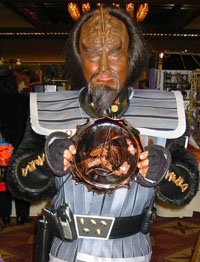 The serrated edge of these plates makes them ideal for fine Klingon dining. If an argument springs up, your dish doubles as a handy weapon. Furthermore, if the food is no good, you can use your plate to punish the chef.

These stoneware plates are etched with the emblem of the Klingon empire and glazed in amber or black (shown). I have a small number that have been etched with Klingon phrases (in Klingon, using the pIqaD characters) such as "May you die before you are captured" and "Khitomer." In the works are inscriptions "Eat your Gahk," "4000 throats can be slit in one night by a running man," and the classic "Revenge is a dish best served cold."

For international delivery, request a shipping quote (usually around $13-$17)
Click on small photos to enlarge!